In 2007, the Dutch Janusz Korczak Association (IJKSN) offered herself a jubilee-present to celebrated its 25th birthday. These korczakian people decided the best way should be an International Conference for young people, working in the field of education, childcare, upbringing, children’s rights, public health service etc. They did it and it was a big success for all the participants. See below their wonderful report, a summery. You will find all posts on this blog on the right menu, under its own label, and the full report is available on demand by email.

The context of the conference 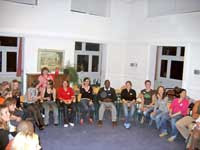 After the Janusz Korczak International Meeting in 1995 in The Netherlands, it became evident that the approach of youth-care in the Eastern and Western European countries, as well as in the countries in South-America, Asia and Africa, differs a lot. During this conference there was a strong demand for exchange of practical experiences and ideas in the field of youth-care, education and children’s rights (special youth at risk). The Janusz Korczak Associations in the different countries have their own, specific manner of dealing with the problems of offering support to children and youngsters in threatend situations (in the family, at school, in the peer-group, etc.).

During that conference in 2005 the reciprocal inspiration was highly appreciated and of course also the inspiration by Korczak’s work and ideas. Specially the young educators and group leaders need know-how and encouragement for their daily work in the institutions, schools and children’s houses. Important was (and is) the coherent continuation in their work. That involved in the obligation for more exchange, study and support at the long term.

For this purpose, the conference in 2007 will give an impulse. It will bring together young professionals, volunteers and experts.

We had 8 important pedagogical themes with high relevance for people from so many different countries, like:

People came from Bangladesh, Brasil, Burundi, Czech, France, Germany, Ghana, Holland, India, Kyrgyzstan, Ukraine, Russia, Lithuania, and Poland. We stayed 6 days in a nice house near the beach of the North Sea and the water temperature was perfect for swimming.

If you are thinking of conferences, often boring, long-winded speeches come in memory and passive listeners.

In our case we followed a different approach. For each topic a specialist worked together with the participants in an inter-active way. It were real workshops and the participants put their own experiences and know-how into the workshops. Each workshop took two morning-sessions. So, after two days another topic could be chosen. 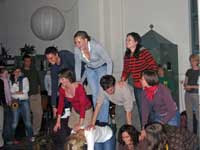 Each time people came to us to tell how much such a workshop meant for them. There was a great commitment among the participants. If you live 6 days together, day and night, a strong tie and trust between people is growing.

And than, the afternoon-session. We had the so-called creativity workshops in which we appealed on other aspects of one’s competences, perhaps unknown abilities like music, sculpt, producing animation films, playing in theatre, etc. These discoveries in yourself supported in turn the workshops in the morning sessions. 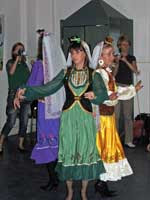 Very special were the "Open Stages" during the evening. Everybody could present their own specialities or projects. We listened to the story of Colette Charlet from France who worked in the project "Children’s city" in Rosario (Argentina); to Julia Fishman and Vladimir Vyzotski from Kiev who told us about the Jewish Welfare Work "Beitenu"; to Nilufar Karim from Bangladesh who showed us her work in Dacca; to Sylvia Guimaraes from São Paulo who told us about "Projeto Anchieto" in one a the biggest slums (favela) of that city; to Irina Gurvich and Natalia Levkova who explained us the importance of the Center of Tolerance in St-Peterburg, etc. etc. People were very much interested in these stories and the "Open Stages" always went longer than expected and were followed by questions and discussions.

During that week we had some special highlights. First of all the breathtaking concert by Shura Lipovsky, famous singer of Yiddish Songs and storyteller. We had beautiful excursions to the North of Holland (The Dutch struggle against the water) and the old centre of Amsterdam, including a visit to the Anne Frank house. Some of the participants rent a bike and made nice trips to the forest and little villages.

What was the result of the Conference?

We'll put in the full report the comments of the participants and details of the workshops. The say goodbye on Friday morning was not easy; many thankful embraces.
The JKSNL Conference team
To ask the full report: "info [x] korczak.nl" 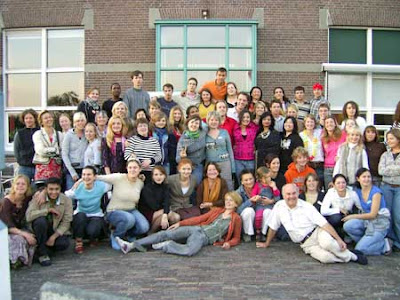